As I was aiming at spending the day at the pit I decided that I would fish static dead baits, as a whole day throwing lures can be quite tiring.
So armed with some sprats, 2 x 2.75tc carp rods fitted with my old  baitrunner reels ,loaded with 30lb PowerPro, I placed my float fished baits ,one to the left of the swim, uptight to some semi submerged branches, the other to my right, where I hoped there would be a patch of  lilies growing up through the water ,affording a good ambush spot for old esox .

After just 10 minutes my left hand float gave a sudden bob and then proceeded to steadily slide out of view towards the semi submerged snags. I had not engaged the free spool option on this reel as I knew that if anything took the bait it would head back into the snags pretty pronto !
I immediately struck and meet a formidable solid resistance , at first I thought that the fish had got me in the snags, and I was attached to a branch , and then I felt it shake its head ,I think I had managed to turn the fish before it knew it was hooked .
Now I am no weakling , but my arm ached as I had to lock down solid on this fish as it now turned back to the branches, and really wanted to get back in there, I was having none of that , and nor was the fish for a while, it kept deep as it tried  to plough its way into the snags. After a good tug of war which hooped the 13ft rod round very nicely, the fish came out into the middle of the swim , but kept making powerful lunges at the snags , then it decided to run out into the lake , which I let it do, backwinding furiously, as the clutch was tightened right down to stop it getting in  the near bank,
I had to let it go for a while, then it started to go back to the snags, but from a different angle, I had to apply a lot of side strain and plunged the rod tip under water and managed to turn it before it got to its sanctuary,  a bit crafty this fish !
It broke surface in front of me ,and I knew that this fish was a "good un" my biggest until now was an 18 pounder, a couple of years back from the river, and this was definitely bigger .
Now the fish sat deep and would not come up without some real effort , I got the net ready as it surfaced again and applied some relentless strain to guide the fish over the net , it spooked at the net and went flying off into the middle of the lake again,
I dropped the net , managed to regain control, and slowly regained line .
Luckily just then a fella visiting one of the carp anglers further up the lake walked along and I asked if he would assist with the netting , I asked if he had netted a fish before, and it was OK he was an experienced angler, the last thing I would have wanted was someone that did not know what they were doing .
And he did a sterling job, I must find out his name (in all the excitement I forgot to ask)
He handed me the net handle when the fish was safely in , I gathered the netting and lifted it out, onto the ready and waiting unhooking mat.
It was hooked inside the mouth on 2 prongs of one of the trebles ,in a bit of soft tissue ,after a couple of exploratory attempts with the forceps, I decided to cut the hooks, as I did not want to cause any damage to the mouth of this fish trying to save a  hook .
In fact I was so focussed on returning such a splendid specimen in good shape, that I had to be reminded to get a photo.
The photo does not do it justice really as the prospective is wrong , but the net under it is  42" so that gives you some idea . 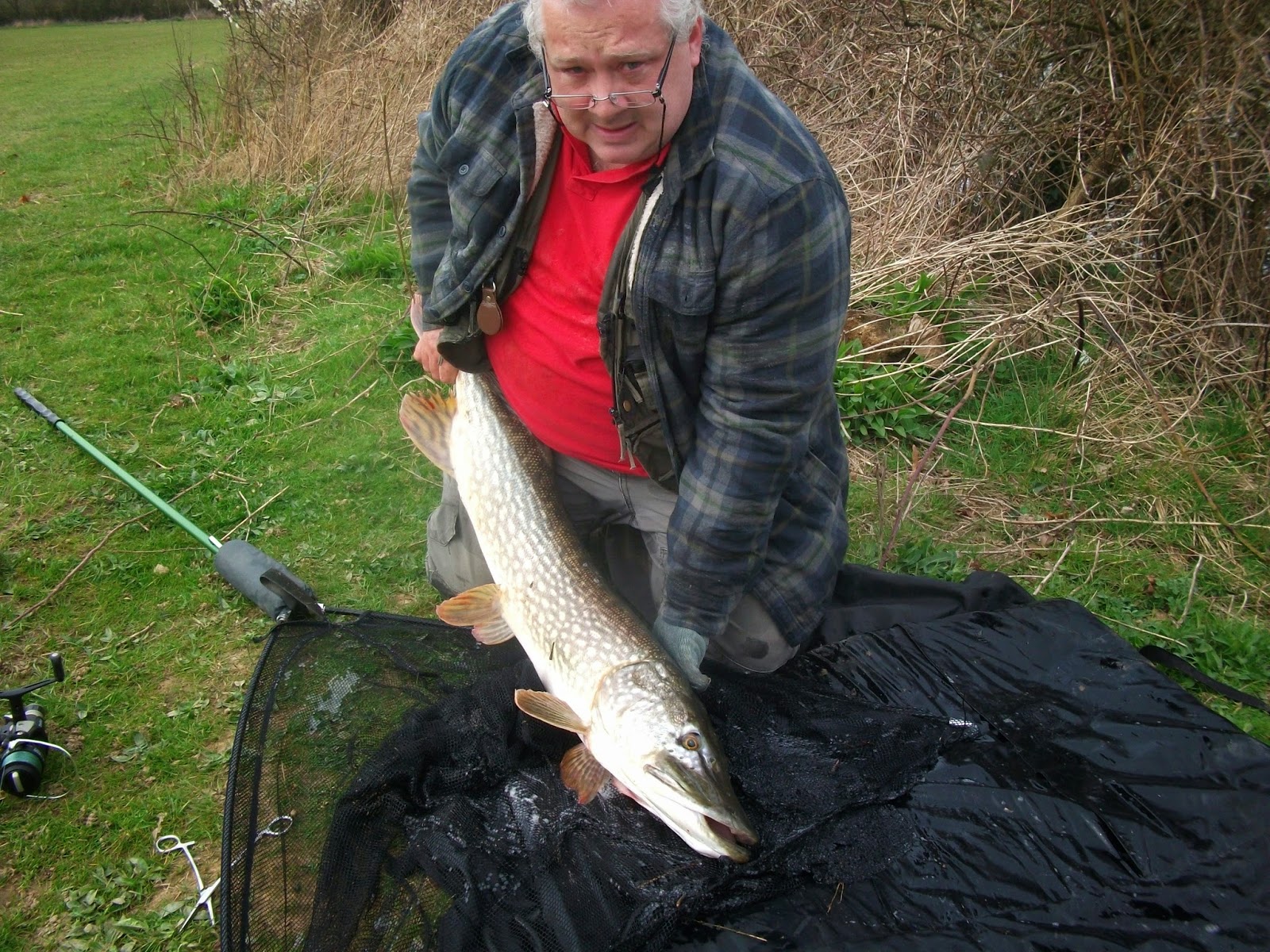 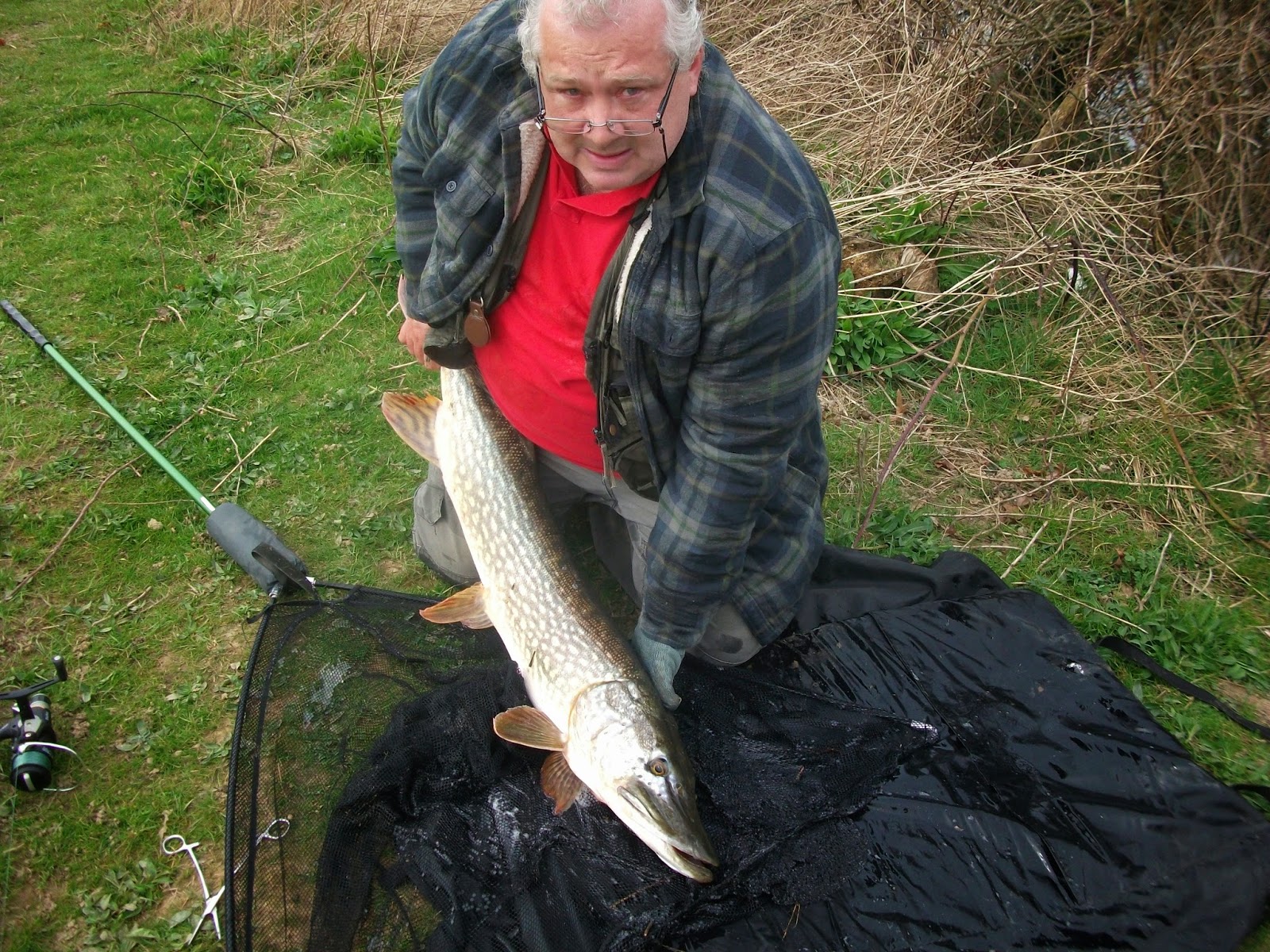 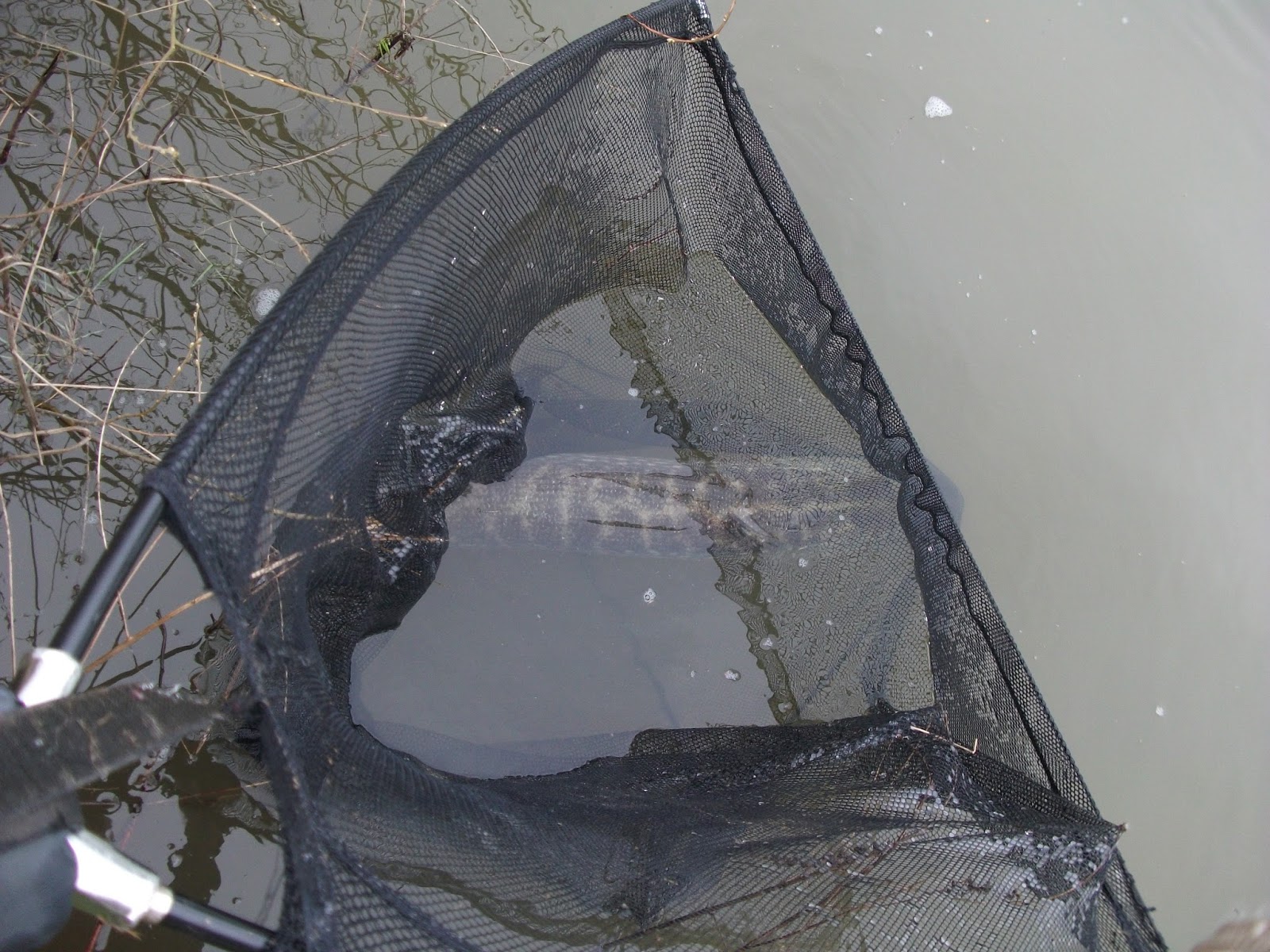 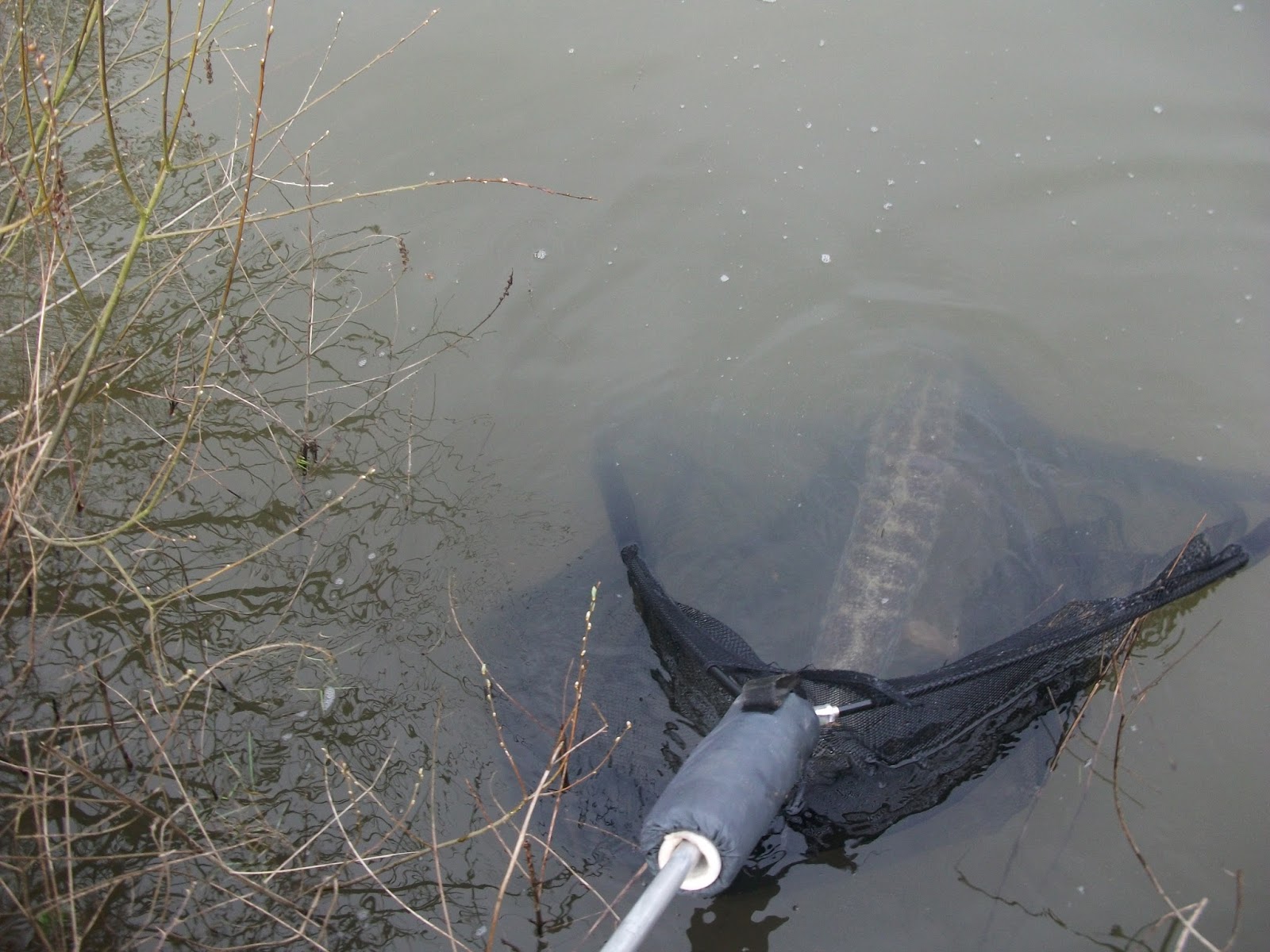 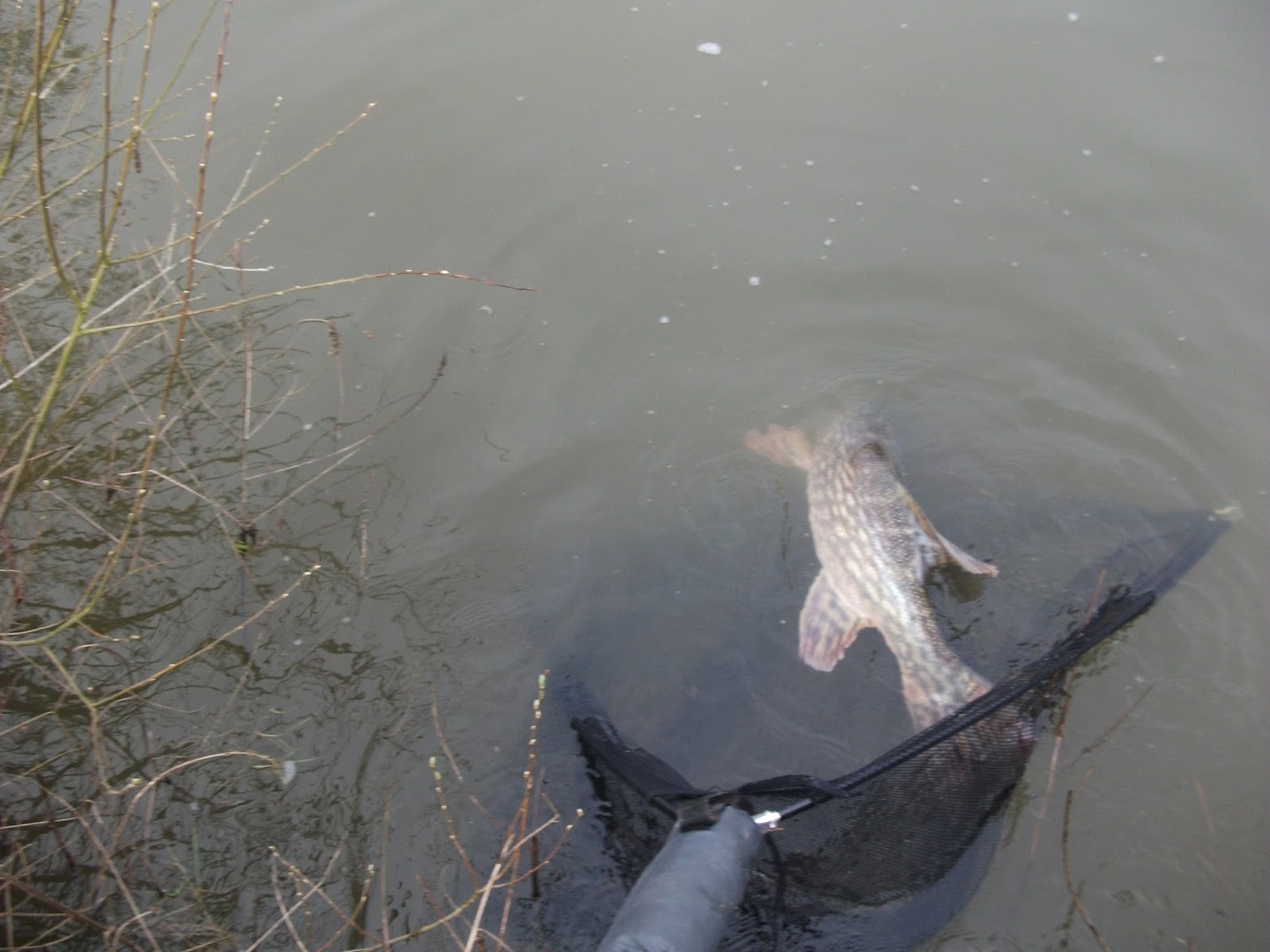