I love it when a plan comes together,
The other week I spotted a pike in my local chalk stream ,
that I estimated to be about 7/8lb ,
not that big , but in this small stream he or she is probably the king or queen of the stream.
I have not seen any bigger.

I have attempted to catch this fish on a couple of occasions,
it has followed lures right to the bank, and then just turned away showing utter contempt for my efforts.
I have almost bounced lures on top of its head,
and it has refused to even look at them .
Once I  spooked it ,as I was crossing the bridge (plank of wood) ,
I nearly joined it in the water

Today I was sitting at home waiting for the rain to stop,
I was waiting, as this was proper rain
It finely stopped, and there was a good piece of blue sky coming my way,
so into the car for the one mile trip to the local pit complex,
which this stream runs through.
I got to the stream , and it was exactly as I had hoped it would be ,
a nice bit of colour in the water, the main stream was flowing quickly ,
with a nice slack pool on the near bank. 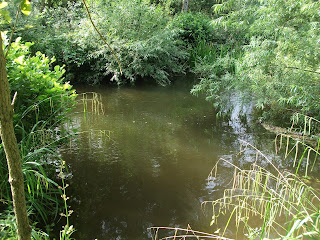 There was only one other car in the car park ,
so there had been very little in the way of bank side disturbance.
I trod very carefully on the approach to the pool ,
which was not that easy,
as I was slipping, and sliding in the quagmire made by the torrential rain

Finally I was in place, without slipping A over T,
so using a small tree as cover and to hold on to ,
I flicked a small chartreuse spinner bait into the main flow,
and let the main flow swing it around to the end of the pool and under the over hanging trees ,
then I started the retrieve, after about 2 turns of the reel I felt a good knock on the lure,
was it a fish or was it one of the many snags in the pool
I cast again, and let the lure swing around again, after about 6 turns I could see the lure faintly,
and then it disappeared , there was a healthy swell in the water,
as the fish showed its flanks before trying to head back to the cover of the trees at the end of the pool.
The clutch on my reel started to give a bit , so I tightened it down and held on ,
this fish was not going to get back amongst all the branches. 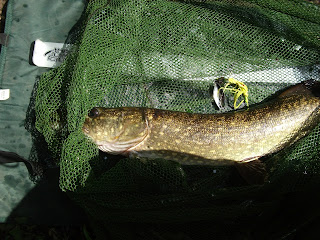 A nice fish from a very small water 71 cms from nose to tip of tail.

Shortly after the capture, the heavens opened again, so I went home with my mission accomplished
Posted by Unknown at 01:46