The morning did not start well , just as we , myself and Ross(siltb) went through the gates of the complex, I remembered that I had not put any of my soft lures, in my waistcoat pockets, I only had some spinner baits in one of my pockets, so a quick trip back home was required.
On our return, we fished the 6 pit first , but without any joy, except for a follow by some small perch, I then decided that we should go to the next pit, the small weedy lake, where I had caught some small jacks earlier in the week , as I thought that Ross might get his first pike, ever, from there.
So after a quick tuition session for Ross , on how to retrieve the lures just under the surface, but over the top of the weed , we started to work our way along the one side of the lake that we are allowed to fish .
Half an hour later, and I might have had a couple of half hearted taps , but no real signs of life, and Ross has had similar, we decide to head back to the 6pit .
On passing the swims that we had already fished, I realised that there was one spot that we had not tried, as it is a bit tight for a novice ,and when we first came passed it the wind was blowing a hoolee straight in to our faces, (so I bypassed it )
I flicked a kopyto shad around the bank side features, and under the over hanging tree, but nothing doing. The sun came out, and the wind died down, so I smacked the lure out to the middle of the lake ,without the fear of the braid being blown in to the branches of the surrounding trees.
After a couple of turns, a croc ( for this small lake anyway) latched on to the lure and FISH ON !
Luckily Ross is a keen photographer, and had his camera at the ready, and he even managed to get some video, although it had to be edited, as out of the 4 minute vid, 3 minutes of it is Ross, and I waving the net around trying to get it unravelled , while Ross is trying his hardest not to miss any of the fight, and I am obviously trying my hardest not to lose the fish. 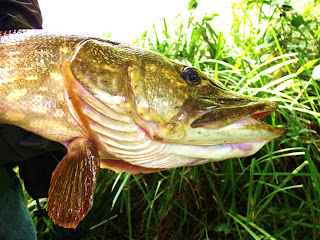 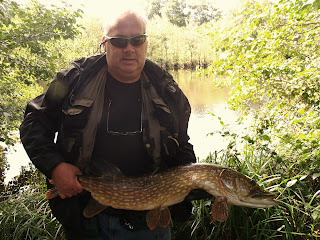 The irony of the morning, is that we went to the small lake, to catch some jacks, and  I ended up with my best fish so far this season, at least 14- 15lb,
I weighed the fish , on my cheap set of scales, but they are not at all accurate, a new set is needed soon.
I would love one of the nets with the scales built into the handles but they are a ridiculous amount.
(I only mention this as Xmas is approaching and if any members of my family (or Santa Claus ) read this, well ... you know the rest
Posted by Unknown at 10:59